Today I was hit by a whale,

She clipped me with the tip of her tail,

With a force that could easily impale, an unwitting surfer,

So magnificent was her breech,

That many a surfer was out of speech,

Looking onwards in amazement and awe,

With a good 10 minute show,

We all watch this graceful creature flow,

Going down and up to the surface with style,

When it came back in a slower pace,

Whilst others had steadily moved out of the way,

For it seem too early to say “goodbye”,

But perhaps this was the mistake of the moment?

My memory soon blanked out,

Before I had time to even shout (help?!),

And the next thing I remember was look up towards a friend,

By “Bondi Rescue” and a few more.

I was met by my girlfriend in the ambulance van,

“Exclude submersion injury!” I thought I heard them say,

All know is that I’m lucky to be alive,

I feel grateful for the help form those five, (..and others!),

Now post-concussion in my bed under the covers,

But perhaps real moral is this,

If we see big whale so close we could blow it a kiss,

Stay back at least 30 meters and enjoy its bliss,

Or we may not be so lucky  to see again the shore!

(Thank you for my luck! And thanks to all those who looked after me from the bottom of my heart x )

Today was a most interesting day, because I got hit by a whale whilst enjoying a Bondi morning winters surf. I’m still recovering from concussion but safe. Thanks so much for all the message of concern. I’ve attache some newspaper articles – will write more in due course!

Southern Right Whale (the picture and following whale info with thanks from; http://www.australiananimallearningzone.com/southern-right-whale.htm)

This species is included in the “Least Concern” Category by the IUCN. Their populations are protected by various laws in many places including Australia, Argentina, Chile, Brazil, South Africa and New Zealand. The main threats to the Southern Right Whales include fishing and coastal developments. 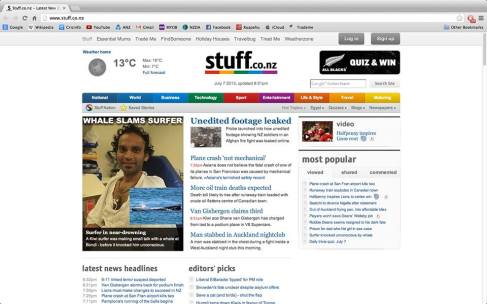 A surfer who was knocked unconscious at Bondi Beach by a whale’s tail said the last thing he remembered was saying, “Hey, how’s it going?” to the whale which was less then a metre from him.

Bishan Rajapakse, 38, a doctor living in Bondi, was knocked unconscious for 10 seconds before he was dragged to the beach by his friend and a Bondi lifeguard.

“I remember trying to talk to it . . . before I realised I was off my board and on my front,” Rajapakse said.

The Sri-Lankan born New Zealander said he had been surfing at the southern end of the beach for about an hour on Sunday morning when his friend Chris signalled for him to paddle over.

“When I got to him I saw there was this dark, black shadow and it was just massive.

“The whale was moving in like slow motion. It was beautiful and it breached and we could see the barnacles and it was slowly going up and down and turning and it actually made a noise. It was amazing.”

Speaking from his bed at St Vincent’s Hospital, Dr Rajapakse said he had no injuries apart from a slight headache.
“Contacting whales is not what it’s cracked up to be. They look nice and soft but I can’t remember contacting it. Maybe it contacted me.”

He said he had no recollection of being thrown off his board. “My mate Chris was there when I came to and was like ‘Bish, you’ve been hit by a whale’.

Apparently my face was down in the water and then I was talking to one of the Bondi Rescue dudes. Then I was on the shore and in the ambulance before I knew it.”

Rajapakse joked that his encounter with the southern right whale had ruined his plans for brunch. “I’ve got a slight headache but I was really hoping to have brunch. Somehow I don’t think that’s going to happen today.”

The director of the emergency department at St Vincent’s, Gordian Fulde, said the surfer would probably be discharged by the end of Sunday.

One thought on “Hit by a whale today”

Error: Twitter did not respond. Please wait a few minutes and refresh this page.